Outdoor Pursuits member Dan Imhoff’s kayaking adventures began in 2005 when had a hankering to go sea kayaking in the Sea of Cortez, Baja Mexico. A friend suggested the National Outdoor Leadership School (NOLS) https://nols.edu/en/. He ended up taking a 23-day course that included kayak camping, fishing, swimming and hiking. Dan describes this trip as a “piece of heaven.”

In 2010 he built a Pygmy kayak from a kit, proving the company right when they say no woodworking skills are required.  Anybody could do it. Several thousand paddling miles and 10 years later she still performs like a champ.

In 2011 another hankering took hold and Dan left Athens in a kayak and ended two months and 1,770 miles later in the Gulf of Mexico. This legendary trip is one that has been rumored to be an urban myth, but Dan assures us he is the man behind this myth and the trip was no myth – it actually happened!

Dan honed his skills by taking an American Canoe Association (ACA) Kayak Instructor course at the University of Akron about a year after his first kayak experience. Over the next several years, he paddled on lakes, rivers, and oceans, preferring unsupported trips – the longer, the better. “Kayaking allows me to appreciate the natural world and get away from the trammels of civilization.”

Dan went on to take advanced (Level 4) ACA open water coastal kayaking instructor training and evaluation class in the coastal waters of the Atlantic just south of Jacksonville. “They put me through the wringer! I learned a lot and had tons of fun.” He also learned that “not all great paddlers are good instructors and not all good instructors are great paddlers.”

Dan highly recommends ACA training and certification because it adheres to national standards of training and ratings, they advocate for access to our waters, clean water, and they create paddling opportunities for people of all abilities with the Adaptive paddling program. Dan adds, “ACA certification is recognized throughout the USA, Mexico and Canada. In some areas before you can rent a kayak they may ask for your credentials before releasing a boat.”

Dan’s paddling fever ran deep. The advanced course helped him to qualify for the NOLS Sea kayak instructor course which included 30 days of paddling and camping unsupported from Bella Bella, British Columbia to Port Hardy, B.C.  Dan remembers big water, lots of wildlife, and the realization that at times that the only thing between him and Russia was about 3,800 miles of Pacific Ocean.

Several years ago a scout leader asked if Dan would be able to provide kayaking training and accompany the scouts on a trip to the Apostle Islands. Dan used the ACA format and Outdoor Pursuits’ kayaks for pre-trip training. When the group arrived, the outfitter was comforted to know the scouts had received the training and could demonstrate their paddling proficiency.

Dan normally paddles with fellow NOLS instructors and students. He likes to paddle with his spouse although she has had enough of camping with bears, pythons and alligators and is not as keen as he is for athletic paddling days.

“The earth’s surface is mostly water and is best enjoyed from a wee little boat.”​​​​​​​ 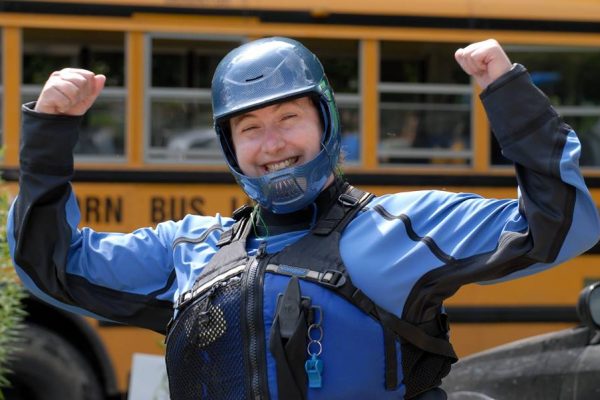